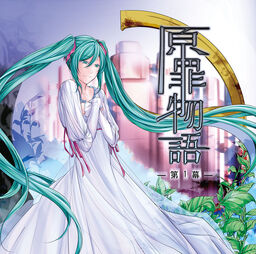 ""Ma" Keikaku" is a song featuring Hatsune Miku, KAITO, and Hiyama Kiyoteru by mothy. It is about Eve Zvezda (Miku), who is the greatest witch of her country and is selected as a candidate for Project "Ma" to birth the "Twin Gods". Her lover, Adam Moonlit (KAITO), tells her that all will be well once the twins are born and when it's all over, they'll settle down in Held's forest.

However, Adam reveals that Eve doesn't actually love him, he has used "Venom", a type of brainwash drug, to make her fall for him. The project fails when Eve miscarries her twins, named Cain and Abel. Adam begs Eve for forgiveness for "ruining" her and realizes his feelings for her are real, they then keep their promise of settling down in Held's forest and escape Levianta.

Some time later Seth Twiright (Kiyoteru) reviews the project and decides to seek out the next "Ma" for his own sake.

Retrieved from "https://vocaloid.fandom.com/wiki/「Ma」計画_(%22Ma%22_Keikaku)?oldid=1202011"
Community content is available under CC-BY-SA unless otherwise noted.