“It has to be me and you, or it'll be no good! halyosy here. I made a song to commemorate KAITO's 10th anniversary! In the song, I tried to include my feelings of gratitude towards fans and staff who have been supporting me, as well as KAITO with his lovely voice, giving me ideas. I'd be happy if we could celebrate together!”
—Author's comment

"Attakaito" is an original song by halyosy. It was uploaded to Niconico on February 14, 2016. It was made for KAITO's 10th anniversary.

This song entered the Hall of Fame. 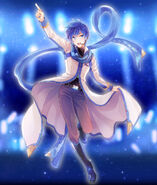 Promotional artwork for the song by Akiyoshi