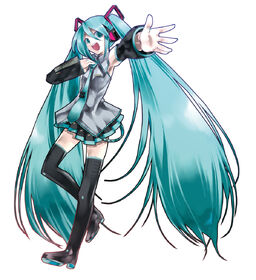 "Anata no Utahime" is a song featuring Hatsune Miku by azuma. It is one of Miku's oldest popular songs. The original, or "Full" version, is by far the most popular. With only a piano to accompany the vocals, the song is licensed as CC BY-NC 2.1 JP.

The subject matter of the lyrics concern Miku singing to her "master" about how she is his diva. Living on his computer, she wants him to make her to convey ideas through the medium of song. Although in retrospect, this concept seems rather generic, it was a fairly new premise at the time. Miku's character as a virtual diva was only just being established at the time of the song's release, which was a mere three days after "Koisuru VOC@LOID" was uploaded.

"Anata no Utahime" entered the Hall of Legend, an honor reserved for songs that have reached one million views, on November 1, 2013.[1] It has taken longer for it to enter the Hall of Legend than most songs there, at 2,236 days, six hours, and nine minutes—over six years.[2]

The Complete version of this song was featured in the following video games:

Retrieved from "https://vocaloid.fandom.com/wiki/あなたの歌姫_(Anata_no_Utahime)?oldid=1085443"
Community content is available under CC-BY-SA unless otherwise noted.