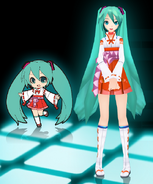 Miku's "Miko" module for the song "Inochi no Uta" featured in Project Diva.