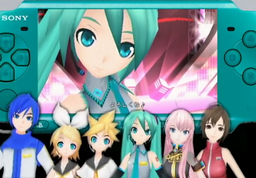 This song was commissioned by SEGA for the Project DIVA series. It is a tutorial for the edit mode feature in several games.

Written by an unknown artist, this version of the lyrics were used in the English version of Hatsune Miku -Project DIVA- F 2nd. However, the F 2nd version (in both Japan and North America) of the song only contains Miku, and is shortened.

Since I like you and all
I'll Edit this Rhythm Game for you!
Beats Per Minute, to the MAX!
My heartbeat is at its limit

Pick any module, okay?
Don't worry, it's sure to look cute
And my ever-changing expressions
Are all your fault!

Edit Mode ♪
In every scene
Edit Mode ♪
Any way you like it
Edit Mode ♪
No low-angle shots now!
And watch it with the animations!
It's embarrassing! Just let me dance!
Okay? ♪