"Electric Angel" is a song about Miku loving her owner. Uploaded in October 2007, it is one of Miku's older popular songs. It entered the Hall of Legend on March 10, 2011. A fanmade PV by Nishiki Koi has also reached one million views. 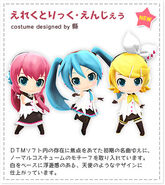