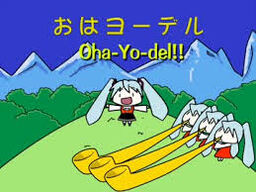 "Oha-Yo-del!!" is a song featuring Hatsune Miku by Bakudan Poppy. No further details about this song were given.

Retrieved from "https://vocaloid.fandom.com/wiki/おはヨーデル_(Oha-Yo-del!!)?oldid=1094555"
Community content is available under CC-BY-SA unless otherwise noted.