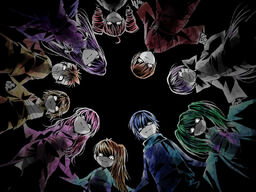 The song is based on the Japanese children's game called Kagome Kagome. The author changed the title to Kakome Kakome.

The video begins with the viewer finding an abandoned building deep in the forest. After venturing in they find that it's filled with abandoned children, the children become overjoyed, claiming they've waited for the viewer for a long time and asks them to come and play. However, when they begin the game, the children's more sinister nature comes to light. It's then revealed in a flashback that a group of scientists wanted to create a type of immortality elixir. To do this, they used brain matter from children and "forbidden machinery". They tested the elixir on the children they use and they became immortal, however they remained deformed and became unable to age. The scientists are implied to eventually have been killed by the children in revenge. With no one left to look after them and no way of leaving the "orphanage", the children went mad over time. The children then resume the game with the viewer and encourages them to drink the elixir as well, so they can play together forever.

This song entered Hall of Fame.

Retrieved from "https://vocaloid.fandom.com/wiki/かこめかこめ_(Kakome,_Kakome)?oldid=1199917"
Community content is available under CC-BY-SA unless otherwise noted.