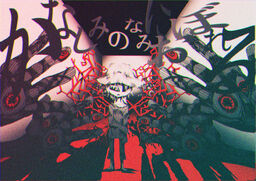 “「I'm drowning in a wave of grief.」”
—Author's comment

"Drowning in a Wave of Sadness" is an original song by Neru. It was uploaded to YouTube on December 20, 2017. The boy in the video is named Hanpen, whose black ribbon that covers his eyes has Neru's trademark.

This song is featured in the albums Sekai Seifuku and Vocalotwinkle.

Retrieved from "https://vocaloid.fandom.com/wiki/かなしみのなみにおぼれる_(Kanashimi_no_Nami_ni_Oboreru)?oldid=1102647"
Community content is available under CC-BY-SA unless otherwise noted.