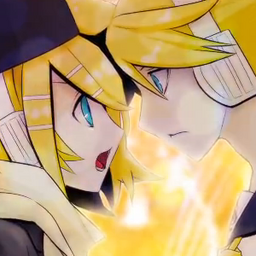 The song serves as the midpoint of the Putin-P series and the last track of part 2. It became overall the most notable song composed by Putin-P.

Following the flashbacks of Stealing is Wrong? and No Need to Worryy!!, Len is shown still hugging Rin from the end of If We Meet Again☆. After being released, Rin muses on her memories coming back and her relationship with Len; with Ronald gone and no more obstacles in their way, Rin urges Len to be with her. Len, meanwhile, said that Rin would sing a song that would destroy this world with her memories back, and that he was deceived. He deprecated himself while Sazae and Fune call him a loser and idiot.

Trying to get Len's attention again, Rin finally insults him to snap him out of his self-deprecation. Afterwards, they join hands at last and share a happy moment. Elsewhere, however, a miserable Miku mourns her loss of Ronald and then sends herself into a drug-fueled hallucination to be with him again.

In Putin-P's album Mienai yoru ni, Kienai Hitomi, a version "without" Ronald's voices, Sazae, or Fune is featured in the album.