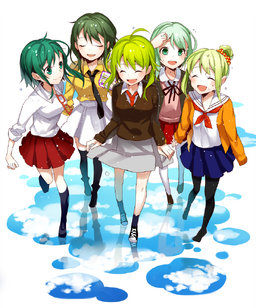 "Today Will Be Cheerful" is an original song by Fuwari-P and is his 13th and best work. It was uploaded to YouTube on March 28, 2015. This song features all GUMI V3 Japanese voicebanks.

This song has entered the Hall of Legend. It is featured in the albums GUMitia, Fuwari-P da yo☆ ~Yume no Katachi~, and SPACE DIVE!! feat. GUMI.

Retrieved from "https://vocaloid.fandom.com/wiki/きょうもハレバレ_(Kyou_mo_Harebare)?oldid=1089041"
Community content is available under CC-BY-SA unless otherwise noted.