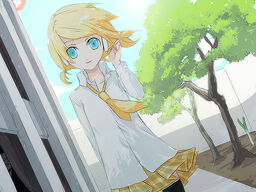 "Kessen Toujitsu" is one of the tracks for numtack05's Putin-P Series; it is Putin-P's second collab with Shiuka. It was first uploaded on April 26, and overall has a relatively popular views, with over half a hundred thousand views (in comparison to other songs in the series; though Kienai Hitomi being most notable with 200,000 views).

Rin, making plans to impress Len, explains how she'll show him that she can also be a Vocaloid Idol like Miku, even if it's annoying. Excited, she invites Len to meet her in the back of the school so he can see all the ways she's changed. Although he's late, Len finally arrives and Rin asks him what his answer is. Len replies it's bad, and Rin freaks out.