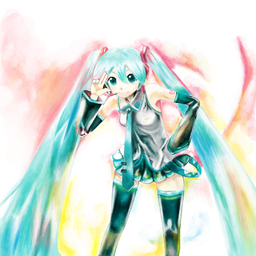 "Kocchi Muite Baby" is the opening song for "Hatsune Miku -Project DIVA- 2nd". A reprint of the opening cinematic for "-Project DIVA- 2nd" on YouTube, which features "Kocchi Muite Baby", has reached over six million views.[1] The subject matter of the song is rather similar to "World is Mine", with Miku portrayed as a "himedere" character being condescending to her boyfriend.

"Kocchi Muite Baby" has entered the Hall of Legend.

I'm always playing tough, aren't I?
It feels like I'm missing out
There's stuff I want to do, but I'm not saying what
You know, that kind of stuff
Wait what? ....What'd you think I meant?

Boys really are stupid
You thought something dirty, didn't you
You're a terrible liar
It's written all over your face, are you OK?
I'm not pulling punches
Ugh, it's like talking to a wall

Before you go on about your epic dreams
Have you looked at where you are?
Sheesh, you're dense

Look this way, baby, the way you should
I won't take "no" for an answer
'Cause I'm playing for keeps
These soft lips you can't but help but stare at
Will make you mine
Today's the day!

I'm always so stubborn, aren't I?
I can't be straight forward, but that's just how I am
I want you to hug me from behind
Just kidding, hee hee
...Wait, hang on!

Don't surprise me like that
You've got to take things slow
But you can't wind me up like this
And then just walk off! Not cool!
Take some responsibility for once!

Look this way, baby, just a little
I won't take "no" for an answer
I'll get you in the mood
These legs you can't help but worship
Will make you mine
Don't get all smitten now

Words aren't enough to express
How big these feelings of mine are
What now? My heart's all aflutter
I can't even think
Oooh, boys like you

Look this way, baby, a little more
Don't make me say it again
Fine, whatever!
I'll do something you can't help but notice
I think
No, scratch that
What, you got a problem with that?

Retrieved from "https://vocaloid.fandom.com/wiki/こっち向いて_Baby_(Kocchi_Muite_Baby)?oldid=1089349"
Community content is available under CC-BY-SA unless otherwise noted.