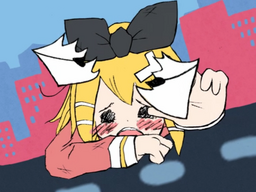 “Good day, planetling! May you all have a fantastic 'week end'!”
—Author's comment (Translated by vgperson)

This song shows the events previous to the war. In this song, Rin represents a typical schoolgirl with no major interests than be with the person that she likes, and although she is aware of the political situation of the countries and all the rumors and prediction about the end of the world, she isn't concerned about them as she can be with her loved one.

As the conflict escalated, one day her love interest left her to go to a "far away" place, leaving Rin with her feelings unconfessed and her heart shattered (although the situation isn't explained, it can be inferred that he went to the war or left the country due to the imminent menace). Being too young to understand, Rin declares that she has no idea of what is the world, the conflict or the war and that she is only aware of the feeling of loss.

Rin, seeing that the conflict is raising and that the end surely is inevitable and that just one love letter was enough to detain to her beloved one, she begins to fill numerous letters with her feelings and decides to spread them through the world trying to bring some hope or find someone that could give some happiness to the devastated and sad world.

The PV ends showing some scenes that reference the previously published songs of this series in their chronological order before finally showing a silhouette of a person (possibly the one Rin loved) opening one of of Rin's messages, of which can be read "For you and your beloved".

Retrieved from "https://vocaloid.fandom.com/wiki/しゅうまつがやってくる！_(Shuumatsu_ga_Yattekuru!)?oldid=1093206"
Community content is available under CC-BY-SA unless otherwise noted.