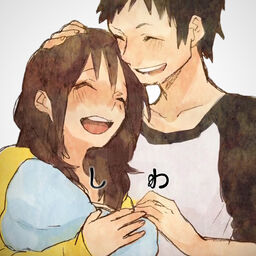 "Shiwa" tells the story of a boy and girl who fall in love at an early age, following them as they grow old. As time goes on, the two vow to enjoy the time they have together and promise to only smile when the other passes away. The song's title, "Wrinkles", is a gentle reminder that time can not go back, and that the story of their love has been etched in their face with time.

This song is buzzG's 31st work, and it has entered the Hall of Legend. It is featured on buzzG's album AMPLOID and the EXIT TUNES compilation albums GUMitia from Megpoid, THE BEST OF GUMI from Megpoid, and GUMissimo from Megpoid -10th ANNIVERSARY BEST-.

A story based on this song, called "しわ" was published in Comic@loid 4.

Cover of Story
Add a photo to this gallery

Retrieved from "https://vocaloid.fandom.com/wiki/しわ_(Shiwa)?oldid=1103132"
Community content is available under CC-BY-SA unless otherwise noted.