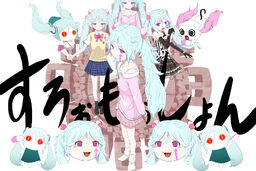 “Nice-to-meet people, I'm nice-to-meet Pinocchio-P. Since the title is like this, a slow shout was received.”
—Author's comment

"SLoWMoTIoN" is an original song by Pinocchio-P.

Miku is struggling with a fever while trying to keep optimism for and from a life of regrets and embarrassment. It also includes the voice of Yukkuri (note that yukkuri in Japanese literally means slow) as well as Pinocchio-P's original characters Aimaina-chan and Doushite-chan.

This song has entered the Hall of Legend and exceeded over 10 million YouTube views. Hence, this is Pinocchio-P's most notable song.

Dropped by the store, bought a bento box
Went back home and watched a quiz show
I knew the answer: Compromise
But I answered "Dreams" and stared at the screen
Got a fever, took some medicine
Got under the covers and closed my eyes
Saw your silly face
I don't wanna die, I thought in a daze

The smug-faced know-it-all in their teens
Who learned humility in their twenties
Who found a niche in their thirties
They're all the same person
Lying awake sweating, I changed my pajamas
The clock hands point to midnight
This song's been going for a minute or so
How many years have you been alive?

Slow Motion, from infancy to old age
Condition, from manic to depressed
Love that isn't tenacious or torpid, that's what I want to give, and yet
Communication, try too hard and you'll fall flat
Audition, even discerning eyes go blind
A life of humility is nothing unusual
I'll be okay

Tweak the parts the way you like
Learn a business that gives love
The time that's past, this moment,
The time that's left, blend together into the late night
Got a bad cough, drank some water down
Took a deep breath and thought some more
Sniffled a little, prayed for peace
Then I sneezed and blew away the intransience of the world

The one who used to laugh innocently
Who didn't cry when they tripped
Who slowly grew into a weathered face
It's all the same person with more wrinkles
Put another cool towel on your forehead
It's still the middle of the night
This song has another two minutes or so
How many years do you have left?

Graduation, from matriculation to the end
Partition, all that fighting beneath the surface
Besides the things we mustn't forget, who cares what happens to everything else?
Imagination, stimulation wears it down
Religion, all blind prejudices
Make a funny face for your funeral photo
And they'll still call you lame, but that's just how it is

Lazing around, writhing in pain
Slowly, slowly, to an unfamiliar place

Slow Motion, in the morning the fever lifts
Condition, nothing but blue skies above
Reflect a little, get a little excited
Kick the bucket at your own pace
Slow Motion, even idols get old
Talk Show, make an impact and fade away
Funny how the time we are born
And the time we go slowly connect together

Combination, try to meet a good person
Question, what is a good person anyway?
A life full of embarrassment
All hollowed out, yeah yeah!
Completely empty, yay yay!
It's not that unusual, I'll be okay