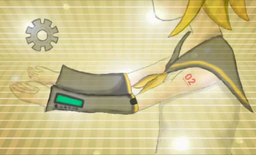 “This singing voice is a clockwork lullaby”

A song about an unnamed girl singing a lullaby to heal someone.

The first line of the song is the same as the last line of "Kotoba Asobi" (Word Play) by Akuno-P which was sung also by Rin.

"Zenmai Jikake no Komoriuta" is part of the Clockwork Lullaby series and is featured on the albums Evils Theater, Akujiki Musume Conchita (Kai), and the album of the same name by Akuno-P.