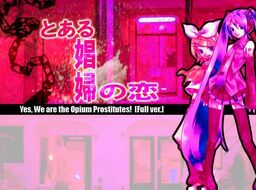 This song is featured on the album Dead Ball Project vol.2 and has entered the Hall of Fame. It is about Miku and Rin's lives as prostitutes who only make a living and money through sex with men. Fed up with their lives of being enslaved for sex and money, they want to kill the men visiting the Brothel, and flee from the place before it drives them insane. When they try to kill the next man visiting the Brothel, He fatally shoots the two prostitutes. As they are dying, their last thoughts and wishes are to meet each other by the Riverbed of Sai and be free from their sex life forever. After their wish, the two prostitutes are depicted dead into each other's arms.

This song was featured in the Miku FES'09 concert.

Retrieved from "https://vocaloid.fandom.com/wiki/とある娼婦の恋_(Toaru_Shoufu_no_Koi)?oldid=1108550"
Community content is available under CC-BY-SA unless otherwise noted.