"Animal Fortune-telling" is a pop rock song composed by Scop, featuring Hatsune Miku. It has reached both the Hall of Fame and Hall of Legends.

In this song, a girl tries to tell her crush the true feelings, but she is too shy to do. So she raises the animal fortunetelling, and implies that the two "will be a good pair by the fortunetelling". This song is featured in Hatsune Miku Project Mirai DX, and features a vocal switch for Kagamine Rin, Megurine Luka, and MEIKO. 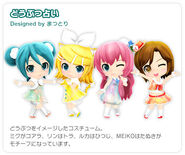 Modules for the song, designed by Matutori, featured in Project mirai.