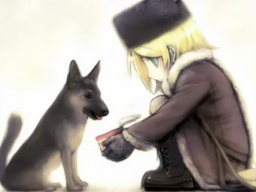 The song was first uploaded on June 1, 2008 and is one of the tracks for the Putin-P Series. Track 6 of Part 2, it's previous song being Stealing is Wrong?. This song mainly talks of Rin's side to Len's "Stealing is Wrong?".

Rin's memories came back, and she "remembered" the days when she was still human and not a Vocaloid. Rin "remembers" when she found Len (the dog), and sang about how work was hard. Fighting alone felt lonely for her, but since Len was there she didn't feel that lonely anymore. Irina even wished that Len would be a human.

Irina left Len in someone else's hands because she had to work for Putin, but before leaving she soon witnessed that her comrade ('human' Len) shot Len (the dog). Distressed, Rin began shooting her colleagues, killing them and finally, committed suicide herself. Afterwards, both Rin and Len were "reborn" as 'Vocaloids' and they met again.

Note: Putin-P often plays with the lyrics. In the original lyrics here, there are several emoticons; and they're not meant to be sung.

Retrieved from "https://vocaloid.fandom.com/wiki/なやみむようっ!!_(Nayami_Muyou!!)?oldid=1082432"
Community content is available under CC-BY-SA unless otherwise noted.