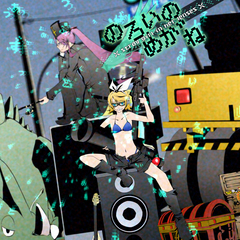 This song was uploaded to Niconico on March 20, 2009. It has reached over 800,000 views, becoming one of Bucchigiri-P's and Rin's biggest hits. It has Camui Gackpo singing in the background and speaking at some parts. He plays a triple role in this song: a doctor, a priest, and an unknown person.

This song tells the story of a girl who gets a pair of glasses stuck on her face and goes through a strange new world in a quest to get them off. Another interpretation is that a girl becomes addicted to RPGs (role playing games).