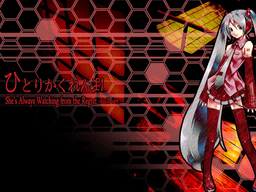 "Hitori Kakurenbo" is a song based on the urban legend of the same name. Hitori Kakurenbo translates to "one-man hide and seek" and is a ritual wherein a doll is offered to a spirit to possess. Some believe that the spirit will stay inside the doll and use it to find you.[1][2] The song was the result of a collaboration between two prominent Vocaloid producers, cosMo and Deadball-P. The arrangement, with its heavy use of piano, bears noticeable resemblance to cosMo's other works.

This song has entered the Hall of Fame. It is featured on the albums Breaktime -Futago + a Na Nakamatachi- and EXIT TUNES PRESENTS Vocaloanthems feat. 初音ミク. On the Weekly VOCALOID Ranking, "Hitori Kakurenbo" peaked at spot number #4, during week #151.[3]