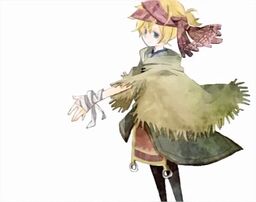 A Person Who Makes Stars is an original work by Mazo-P. It's an ethnic song, sung by Kagamine Len.