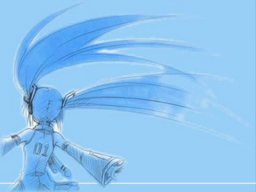 Funakoshi-P's fifth original VOCALOID work. An upbeat song about knowing you must leave someone, but hoping to meet again.