"PoPiPo" is a catchy, almost nonsensical denpa song by Lamaze-P in which Hatsune Miku sings about her vegetable juice and how wonderful it is. She eventually picks a certain type of juice ("the green juice") as her favorite and recommends it to the listener. "PoPiPo" has become not only a popular Miku song but also a well-known meme, spawning countless covers by both other VOCALOIDs and human singers in various languages, as well as several fanmade PVs and parodies and even its own merchandise. Although the song is fairly popular on Nico Nico, it has become even more popular on YouTube; the top three most viewed uploads of the song there have a combined total of over 11 million views.

Following the widespread success of "PoPiPo", Lamaze-P composed Teto's version (ぽっぴっぽーMk-Ⅱ (Popipo MK-II)), Miku's English Version of the PoPiPo, Luka's Version and Rin's Version. It soon became apparent that the song would turn into a meme. Both the Japanese and English versions of Miku's PoPiPo made it into the Project DIVA games, as well as the Nico Hall of Fame (Japanese version only).

If you are in the United States, You may listen to PoPiPo with the original PV Here:

Written by Otonagi-P, this version was used as a second verse of the original song in the Mikunopolis in Los Angeles and Miku no Hi Dai Kanshasai 39's Giving Day concerts. 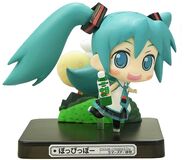