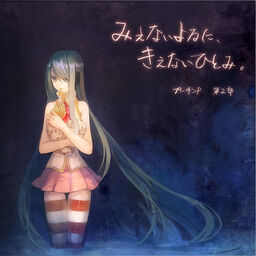 It contains 11 tracks, 8 published songs from the Putin-P Series (only without Ronald's voice; fully re-mastered) and 3 unpublished songs. It also includes a 12-pages booklet drawn by Shiuka. 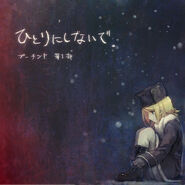 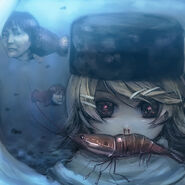 HikkieP: "Hello, everyone. Pleased to meet you. I am HikkieP. Let me make some comments on PutinP's new Album."

Track 1 [Mahouwajadou] - "A nostalgic neo-acoustic tune linked good old UK rock scenes. It is not understood...that it is "Nostalgic" though it is neo lol"

Track 3 [Isshojanai] - "The exellant ballad helps the best acts and settings of these sad stories. You may notice dark shades surrounding correlation between casts"

Track 6 [Nayamimuyou!!] - "A simple stylish-pop looking back Rin's past and expressing a contrast between bitter memories and a bright spring time"

Track 7 [Mienaiyoruni.] - "This is a dramatic number changing scene from funny pops to chic part"

Track 9 [Hidamari!] - "The additional track of techno-pops by Idol Miku"

Track 11 [Mienaikokoro.] - "The additional track of rythem and blues by pu-rin"