This song describes Miku introducing herself to the world. It is a denpa song, and thus the title Miku Miku ni Shite Ageru (I'll make you Miku-Miku-ed) carries no specific meaning in Japanese. Thus, what the title actually means is a subject of disagreement among fans. However, the term was derived from ぼこぼこにしてあげる (boko boko ni shite ageru), which means I'll beat you up. One of the prevailing interpretations among the Japanese fandom is I'll make you obsessed with Miku, conveying the idea that Miku strikes fans' hearts with her voice. Similar expressions are みくみくにされる (Miku Miku ni sareru) (I'm Miku-Miku-ed), フルみっくにされる (furu Mikku ni sareru) (I'm Miku-Miku-ed to the full extent) and so on). It is commonly said to newcomers in the VOCALOID fandom as a welcome, or to make them a VOCALOID fan by replacing Miku with another VOCALOID name, implying that they will turn you into an overall VOCALOID fan.

The song was recorded as the first VOCALOID song to reach 1,000,000+ views on Nico Nico. The song also topped the first Weekly VOCALOID Ranking on Nico Nico. It was one of three early Miku songs to establish Miku's character as it is known today, along with kz's Packaged and Koisuru VOC@LOID. As of 2022, "Miku Miku ni Shite Ageru" is officially the most viewed Miku song (original upload) on Niconico, with over 15.9 million views. The next most popular original VOCALOID upload on Niconico is Kurousa-P's Senbonzakura, with 15.5 million views.

Um, I wonder if you could
Hurry up and install me on your PC
Is something wrong?
You've been staring at the package forever

I'm gonna Miku-Miku you
I'll make you more Miku-Miku
Than anyone else in the world♪
So please, give me more to sing

Animelo is an Anime-Central concert where songs from various anime are performed in a concert-like fashion. It was here that Miku appeared as a surprise in 2009. Not only Miku came, but Rin and Len's voice provider, Asami Shimoda, sang Kokoro as a teaser for introducing Miku, who sang "Miku Miku ni Shite Ageru♪". The song Black★Rock Shooter followed Miku's appearance, along with its anime's trailer.

Miku gave her first overseas performance on November 21, 2009 at AFA in Singapore, and "Miku Miku ni Shite Ageru♪", Koisuru VOC@LOID, and (The) World is Mine were featured. 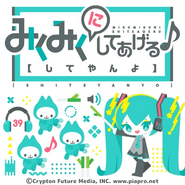 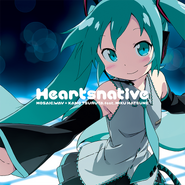