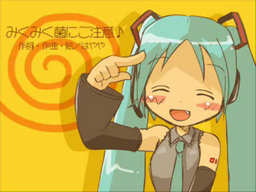 Hayaya-P's second original VOCALOID work, it is about Miku infecting you with her songs. The song has entered the Hall of Fame.

Retrieved from "https://vocaloid.fandom.com/wiki/みくみく菌にご注意♪_(Miku_Miku-kin_ni_Gochuui♪)?oldid=1085187"
Community content is available under CC-BY-SA unless otherwise noted.