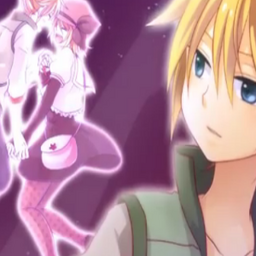 The Swaying Universe, Love and the Future is a song composed for the compilation album Kagamination. It's Hayakawa-P's first collaboration with Suzumi, also his first album collaboration project with other composers. In Hayakawa-P's album Bakutaru Yume, Kakutaru Koi. the song was remixed with the title "the second round", which was also featured in Karen-T's album "TIME TO SAY HELLO".

It tells the story of a boy (Len) who couldn't get together with the girl (Rin) he truly loves. He comforts himself with the fact that in a parallel universe, somewhere out there, another "Len" have a happy ending with Rin. With a heavy heart he accepts the fact that he could never get her, however highly believes and wishes luck to whoever "Len" in a parallel universe "gets" her.