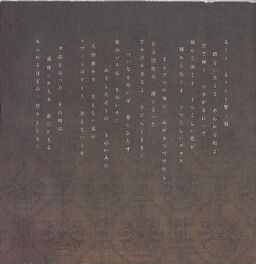 This song summarizes what became of the seven sins. A flower bloomed from a sword, a glass came from the seeds, a stone became four mirrors, a spring became colored in blood when the blades were dipped in it, the doll danced in the wind and the spoon scooped up soil. Eventually they are collected in the forest, along with anger.

It is an album exclusive released as a bonus track for Evils Kingdom.