“I'm Jin a.k.a. Shizen no Teki-P. This is my 14th song. The story revolves around the 'tragedy'. "Let us meet next time, and the next, and the next also."”
—Author's comment

"Outer Science" is an original song by Jin. It was uploaded to YouTube on September 3, 2013. This song tells "the story of the eyes saying as much as the mouth."

This song is the bad ending, or the ending of "Route XX" of the Kagerou Project. The antagonist, Snake of Clearing Eyes, is trying to get a person named Marry to reset the timeline. He does so by violently murdering all her friends right in front of her in many different ways. It ends with Marry giving up and surrendering, causing her to reset the timeline so that he can live again.

This song has entered the Hall of Legend. It is is featured in the album Mekakucity Records. 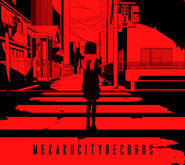