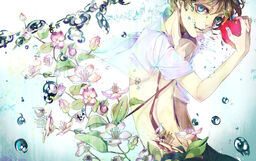 “Please enjoy IkeLen[1], a song of a complicated garden of friendship and love.”
—Author's comment

"Out of Eden" was first uploaded on July 20, 2010, and is Kouhei's first original work with Len. A "short" version of it was previously released on July 12, announcing that the song would be uploaded on July 20. The short version did not get much attention (it failed to even reach 10,000 views); however, the full version became Kouhei's most notable song with over 400,000 views, and is his first work to reach Niconico Hall of Fame. It also became one of the demos for Len's Power Append.

The song tells of Len falling "in love" with a friend. They were allured with each other to point that they left their friendship behind for a romantic relationship.