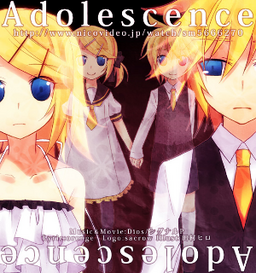 "Adolescence" is an original song by Signal-P. It was made for Len and Rin's 1st anniversary.

This is a spin-off of "Cendrillon" with different lyrics; both are produced by Signal-P and Orange.

In a matter of plot, Orange said that the theme is "at the age of 14, the duo celebrating adolescence". With only that to grasp, both Signal-P and Orange said that the song could be interpreted in any way. Some of the most famous interpretations are Len and Rin being romantically interested with each other, or the refusal of having to grow up.

This song has entered the Hall of Fame and invited various derivatives whether it is a PV or a fanart.

Hiro Tamura also published a doujinshi called Perdu that shows the story and background behind this song first released on VOC@M@S 8.[1] 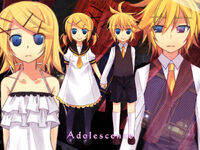 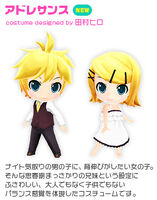 Retrieved from "https://vocaloid.fandom.com/wiki/アドレサンス﻿_(Adolescence)?oldid=1102367"
Community content is available under CC-BY-SA unless otherwise noted.