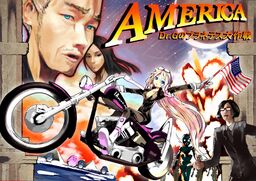 “It's Jin. I've made an American-sounding song. "We are all right!" This song is for the IA Project first anniversary. Happy 1st anniversary, IA! This song is not part of "Kagerou Project", of course.”
—Author's comment

"AMERICA" is an original song by Jin. It was written to celebrate IA PROJECT's first anniversary.

This song was later rearranged and uploaded as "America ~We are all right!~". This version was uploaded to Nico Nico on October 11, 2013.

The original version has entered Hall of Fame and is featured in the album IA/02 -COLOR-.

The ~We are all right!~ version is featured in the game IA/VT Colorful.

The ~We are all right!~ version was featured in the following concerts:

"1st Place 10 - 11th Celebration LIVE: "KEEP HAVING FUN!'" was an event organized by 1st Place in celebration of over a decade of existence, featuring artists under queens label and IA PROJECT record labels, as well as several musical guest appearances. IA was featured in a hologram/live segment performing songs from producers/musical artists Jin, Ishifuro, and ASY. She performed SEE THE LIGHTS, LIVEDRIVE, Headphone Actor, One Two Hello, "America", My Soul, Your Beats!, and World Calling.

Retrieved from "https://vocaloid.fandom.com/wiki/アメリカ_(America)?oldid=1089035"
Community content is available under CC-BY-SA unless otherwise noted.