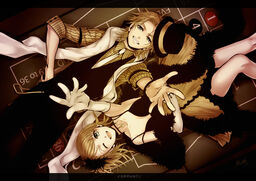 "Cheating ⇔ Casino" is an original song by teamOS. It was uploaded to YouTube on January 25, 2015.

This song tells of 2 tricksters in the casino (Len and Rin). They give an impression that they really are the master of their casino; though throughout the video it can be seen that they were cheating along the way. They proceed to become the last two 'masters of the Casino' and move to a final game on the Couple's Table, to which they both cheat all throughout the game.

Remembering their dark past, both realize that their tricks may cause them to lose each other and Rin throws down the dice to surrender and join her love.

This song has entered the Hall of Fame. It is featured in the albums Vocalogemini, After the partY, EndlessroLL, and Kagaminext. 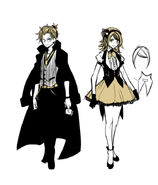 Suzunosuke's first design for the song