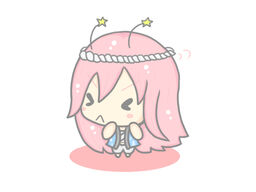 A song about Luka being very picky and rejecting everything by saying "iyada" many times. She also encourages others to say "iyada" many times to reject things as well. In the end, she wants to stop her "iyada" habit and move on from being a rejecting girl. Fans note on how high pitched and totally different Luka sounds as if it is someone else's singing voice.