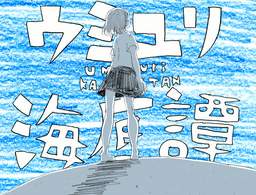 This song was uploaded onto Niconico Douga and YouTube on February 24, 2014. Since then, it has entered the Hall of Legend and reached over 4,000,000 views. It is n-buna's 14th published work.

Hang on, listen
It's nothing, just don't laugh at my song
An SOS strolling in the sky
I am, I am, I am

The traces of a dream, your sobbing
I couldn't cough up the colors of this seafoam garden
Cutting across a sky of swimming light
In the depths of letters and between waves

You just drifted away

Hold on to me, you know I'll know
Don't laugh at my song
On the undersea train fading away
Tears, these tears

Take them away if you're going to go
And don't come back
A walk through the sky in quadruple time
And I, and I, and I

Deep in my heart, the fading light blotted you out

The traces I can touch, the continuation of the dream
Won't start, even though I won't forget them
Reaching the light, swaying on the waves in the depths of the night
You waved your hand to my heart, that's all

Just gently cover it up, I don't need it anymore
Don't sing those lies
There's no such thing as a happy ending
Where I laugh and say I believed you

Just fight back, if this is the way the world is
Don't you stop here
Cry, laugh, a star of the first magnitude
Love, love, love

I drew a you that would never fade, give me more
This love, inhaled by a stranger
Wound up killing me, those expectant words
Laughing so I don't hear

Hold on to me, I don't need it anymore

Just gently cover it up with our vague love

Hang on, listen
It's nothing, just don't laugh at my dream
On the undersea train fading away
Tears, these tears

Take them away if you're going to go
I won't stop here
Cry and laugh out loud, SOS
I am, you are, I am

Drowning on the last train home, in a sky drained of tears

This song was featured in the Hatsune Miku Magical Mirai 2016 concert.

Retrieved from "https://vocaloid.fandom.com/wiki/ウミユリ海底譚_(Umiyuri_Kaiteitan)?oldid=1089661"
Community content is available under CC-BY-SA unless otherwise noted.