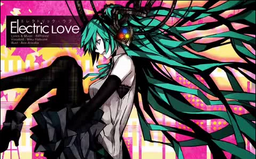 This song was first uploaded to Niconico on December 15, 2009. With over 300,000 views, it is one of Hachioji-P's most popular songs. It is featured on an album of the same name, and is included in Vocaloid-P Data Series vol. 1. Additionally, the album Electric Love Collection consists entirely of remixes of it. It is featured in the game Project mirai 2.