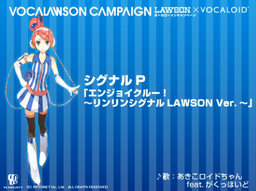 An original song by Signal-P, "Enjoy Crew" is a parody of his first work, "Rin Rin Signal".

The song is mostly centered around Akikoloid-chan. In the song, she is a worker at a Lawson convenience store. Akikoloid-chan sings about her job and her love of the food at the store, mentioning food cooking in the microwave throughout the course of the song. Akikoloid-chan mentions wanting a raise; however, her shy boss, represented by Gackpo, suggests that Akikoloid-chan take her job more seriously and picks up more shifts.

This song has been used as a demo song for her.

This song was featured in the Akikoloid-chan LOVE album.