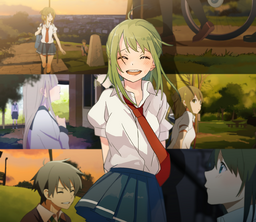 “I've always wanted to have this kind of love, but it's just a pipe dream, for my childhood friend's a plump guy with a shaven head.”
—Author's comment (Translated by Ame)

The song first appeared on the album IA THE WORLD ～Hikari～, where it was sung by IA. Later, a cover with GUMI's vocals was featured on Last Note.'s first album first trip, along with an original album exclusive music video by Hechima, which was available with limited edition of the CD. The PV was later uploaded to niconico.