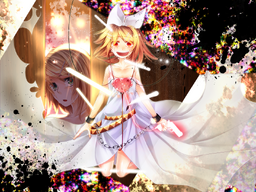 "Adult's Toy" is Utsu-P's first original work using Kagamine Rin. It was first uploaded on June 18, 2010 in celebration of the Kagamine ACT2's anniversary. This song, according to the composer, Utsu-P, could be interpreted as Rin being a dangerous toy; or a slave and is treated as a "Toy" for the adults to play with.

Retrieved from "https://vocaloid.fandom.com/wiki/オトナのオモチャ_(Otona_no_Omocha)?oldid=1102289"
Community content is available under CC-BY-SA unless otherwise noted.