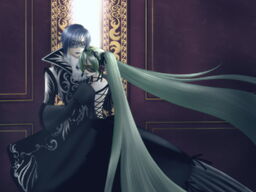 "Cantarella" is an original song by Kurousa-P. It is about an obsessive and intoxicating romance. A man (KAITO) who tries to keep his love for a girl (Miku) hidden and approach the girl in order to make her his. Taking time by the forelock, he gets closer to her, and he finally reveals himself.

KAITO and Miku personify Cesare and Lucrezia Borgia respectively, known for their suggested incestuous relationship and use of poison.

A short remake version of the song was later used as one of KAITO V3's official demos.

This song was later rearranged and uploaded as "Cantarella ~grace edition~", which was uploaded to YouTube on January 6, 2015. It was made in commemoration of the 5th anniversary of the original song.

The ~grace edition~ has entered the Hall of Fame.

Our gazes meet,
Inside this closed-off world

You may pretend not to notice but we're drunk on love

This burning heart, I hide it as I draw closer
To feel your sigh would enrapture me

Set a trap now in your ordinary love
If I find the smallest crack,

A musical based on this song ran in Shibuya's Space Zero theater in Tokyo from August 3 to August 7, 2011. It was directed by Yukio Ueshima, with Kentarou Kanesaki, Otouto no Ane and Tomohisa Sakou starring in the main roles.[1] The play was also streamed live on Nico Nico Douga.[2]

Ichika made a manga adaptation as well called Cantarella -Poison of Blue- which was published in the digital magazine Nico Nico Age Premium in April 9, 2011 (also available at Yahoo Bookstore). The physical print was released in October 9, 2012.

The first works mentioned are inspired off of the theater play and the later one uses both KAITO and Miku.

Concept art for the ＳＧコス２contest by Ginko

Cover of "Cantarella ~Poison of Blue~", by Ichika

Cover of "Cantarella -Immoral Love and End of Poison-", by Akira Sakamoto

Cover of "Cantarella -Forbbiden Love is Poison-", by Kaoru Ooshi

Promotional artwork for the song