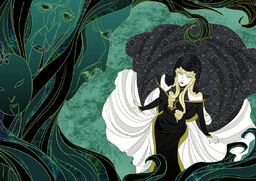 The song follow Hänsel (Len) and Gretel (Rin), right after they've killed their parents, Adam (KAITO) and Eve Moonlit (Miku). They take her Original Sin and rip it into seven pieces, Lust, Gluttony, Pride, Sloth, Envy, Greed and Wrath, sending them out into the world in the hopes that they'll be cleansed. Held, the tree god, witnessed this and asks Elluka Clockworker (Luka) to collect them, who agrees because she doesn't have anything better to do with her newly gained immortality since she's lost everything she held dear anyways.

Elluka wander across the countries until she reaches Asmodean and stumbles across the Venomania residence where the sin of lust is committed. The Original Sin Story has ended, the Chrono Story has begun.

Written by Rgveta, the PV's illustrator. There are some mistranslations with names.