"Kokoro" is a song featuring Kagamine Rin by Toraboruta-P.

The song tells a story about a robot (Rin) made by a lonely scientist, but is missing a program unable to be made: a heart. Some time after her creation, her scientist passes away, leaving her alone for several hundred years. She begins to wonder about her creation and makes a wish. She accesses the files that her creator had left and finally gains a heart. In the process, she discovers what it's like to be happy and sad. With her new feelings, she gratefully dedicates all of the songs that she sings to her creator. In the end, the miracle robot had a short in her system and could no longer sing. However, she had a smile on her face in her last moments, resembling an angel.

A prequel named Goodbye, Thank You was made for the album of the same name. It tells the story of the robot's creation and the making of the heart told from the scientist's (Gackpo) point of view.

A robot made by a lonely scientist
In almost every way a "miracle"
But this miracle wasn't enough
There was one thing it couldn't run:
A program called "Kokoro"

Just now it started, a quickening miracle
For some strange reason the tears won't stop
Why am I shaking? The accelerating beat
Is this the "Kokoro" I wanted?

Toraboruta-P announced that on April 27, 2012; (previously it's stated to be April 17, but it was delayed) he will release his novel entitled "Kokoro", a novel based on the song.

The novel is written by Katsuyoshi Ishizawa and illustrated by Nagimiso.SYS, an illustrator most notable for his PV of "Roshin Yuukai" also a card illustration by redjuice. The price is 1,200 yen and was available for purchase in Amazon on April 27.

A crossfade of the novel ("Kokoro" arrangement by Toraboruta-P and video by Nagimiso.SYS) can be seen on niconico and YouTube. A month after the novel was put on sale on Amazon, it was announced that the "Kokoro" novel had sold out and could no longer be purchased from Amazon. There is currently no news of a second wave of printing; it has sold faster than expected.[2]

The novel tells the story of a group of scientists who worked on realistic-looking robots. Their works included 'Number 02' (Kagamine Rin) and 'Mirai' (Hatsune Miku). One of the scientists wished to install the Heart, a program that allowed the robots to have feelings, into Number 02. However, the others refused, due to the fact that a few years back, when they installed the program into 'Number 01 Rin', the robot went insane and killed a scientist named Kagamine Rin. The robot has since been modified into 'Number 02'. The Heart, which still contained memories of Rin, was secretly installed into Number 02. Many centuries later, Number 02 woke up and and found out that she was surrounded by a search party. There she meets 'B' (Kagamine Len), who explains to her that they were looking for the Heart. Number 02 then explains the origins of the Heart…

Animelo is an Anime-Central concert where songs from various anime are performed in a concert-like fashion. It was here that Miku appeared as a surprise in 2009. Not only Miku came, but Rin and Len's voice provider, Asami Shimoda, sang "Kokoro" as a teaser for introducing Miku, who sang みくみくにしてあげる♪ (Miku Miku ni Shite Ageru♪). The song Black★Rock Shooter followed Miku's appearance, along with its anime's trailer. 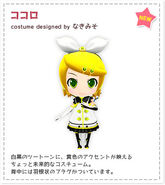 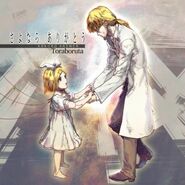 Promotional artwork by redjuice for the Kokoro Stage Play.

Promotional artwork by redjuice for the Kokoro Stage Play.