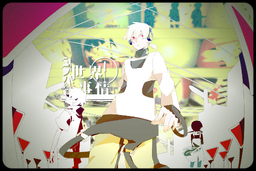 “The story of a "human" whose eyes are awakening.
「For example, if it were such a future.」”
—Author's comment

This song was uploaded on March 29, 2012, and has reached over 2,000,000 views, becoming the only Miku and IA duet to do so. The story revolves around Konoha trying to save Hibiya and Hiyori, but never being able to make it in time.

This song is the sixth track in the Kagerou Project.

Retrieved from "https://vocaloid.fandom.com/wiki/コノハの世界事情_(Konoha_no_Sekai_Jijou)?oldid=1130000"
Community content is available under CC-BY-SA unless otherwise noted.