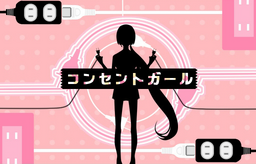 Outlet is Jinsei-P's 19th original song and one of their most viewed songs. The song has an upbeat tune, relying heavily on electronic sounds and a fast-past drum beat. The song talks about a "poor, innocent, helpless" outlet girl describing how it feels to be drained due to the limitations and demands of her job.

It is important to note that while katakana for the song reads Konsento Gaaru (Consent Girl), the song is not describing a reciprocal action but rather "concentric outlet". In early 1920's, electrical outlets in England were round instead of 2 or 3 pronged, as they are today. Though the English use of the phrase is now obscure in the English language, the word in Japanese refers to modern day electrical plugs and sockets.