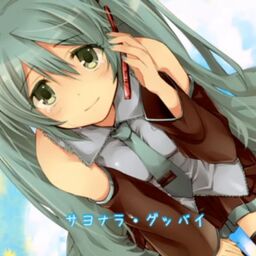 "Sayonara·Goodbye" is an upbeat song by Noboru↑-P that seems to be about breaking up with someone over the phone. However, on closer examination of the lyrics, some fans have determined that it is actually a song about bereavement. Like "Koi wa Kitto Kyuujoushou☆", Noboru↑-P says that this song was originally going to be death metal.

Retrieved from "https://vocaloid.fandom.com/wiki/サヨナラ・グッバイ_(Sayonara·Goodbye)?oldid=1089686"
Community content is available under CC-BY-SA unless otherwise noted.