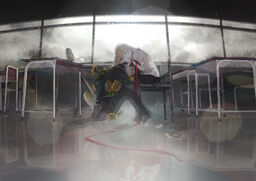 The song is based on a true story (Mikito-P's side). The title may be an anagram for the name of an idol called Rino Sashihara. There are traces of her identity in the song's lyrics as well.

This song is featured in Mikito-P's albums Vocalo Danshi Vocalo Joshi and Boku wa Hatsune Miku to Kiss wo Shita, in addition to the EXIT TUNES compilation album Vocalofuture.

This is the first installment in a song trilogy, followed by Yonjuunana (from the idol's perspective) and Akaito (back to Mikito's).

There is a manga of Sarishinohara illustrated by CHRIS published in the magazine Comic@loid. On January 28, the manga was released as a tankoubon. There are currently no plans to release this manga in English, but the fan group Vocalations is translating the series on their website.

Retrieved from "https://vocaloid.fandom.com/wiki/サリシノハラ_(Sarishinohara)?oldid=1195286"
Community content is available under CC-BY-SA unless otherwise noted.