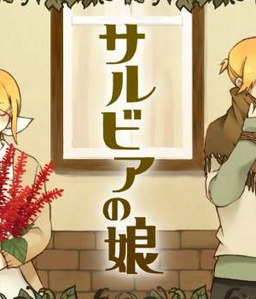 "Daughter of Salvia" is Nanami-P's sixth Vocaloid work and is her most notable work with over 20,000 views. It's also Nanami-P's first song to feature Rin, with collaboration with Haruko doing the illustration. Mentioned in her mylist comment, the song tells a story of a girl growing up, and how Nanami-P mentioned she took it as a challenge on making Len singing in bass / low voice.

The song tells a story of the daughter of an inn keeper (Rin) meeting a traveler from a far away country (Len). Eventually they both fell in love. More of the story can be read on Nanami-P's novel site, with the title of novel being "In the Salvia Street".

Rin is also holding salvia flowers on the official art, as referred to in the lyrics and identified in the title.