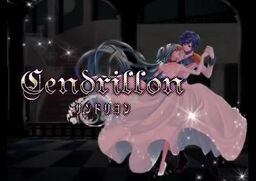 "Cendrillon" is an original song by Signal-P. The title is the French name for Cinderella.

A girl, the titular Cendrillon (Miku), attends a ball to kill Prince Charles (KAITO) when the clock strikes 12:00 AM, since she was handled by the fairy godmother.[1] As Cendrillon and the prince meet, they dance together and fall in love. The girl becomes increasingly conflicted as midnight approaches, falling into a dilemma as she does not want to kill him. Eventually, she stabs the prince when the bell rings. The final lines of the song discuss the moment right after the prince is stabbed while she can still feel him with her, and muses on how they want the moment to last forever.

The PV is very ambiguous and can be alternatively interpreted as Miku having a split personality, and the "darker" side stabbing KAITO while the "good" side cannot stop it. This, added to the open of the lyrics and the popularity of the song, had generated numerous PVs with different interpretations.

There are several different versions of this song: it has been used as an official demo for VY2 and VY2v3, featuring VY1 and VY1v3 as back up respectively, a variation with different lyrics ("Adolescence"), was uploaded to commemorate the Kagamines' 1st anniversary, and a version with different instrumentals was uploaded in celebration of the song's 10th year anniversary, featuring Hatsune Miku V4X and KAITO V3.

This song has entered the Hall of Legend. A spin-off with "a different ending", titled "Catastrophe", was uploaded on 22 April 2019.

In September-October 2019, upon the Virtual Singers Series' debut in the mobile game 神魔之塔 (Tower of Saviors), the monster card "Swift Glamour - Hatsune Miku & KAITO" was added.[2][3].

The song has received a novelization as of July 25th, 2014. It was a collaboration between the original creators, Dios and orange, and 高円 玲音. It can be bought from Amazon Japan.

The cover of the light novel

Alternative version of the monster "Swift Glamour - Hatsune Miku & KAITO", showcased for promotion and in-game use

Retrieved from "https://vocaloid.fandom.com/wiki/サンドリヨン_(Cendrillon)?oldid=1168062"
Community content is available under CC-BY-SA unless otherwise noted.